On Saturday 14th September, our little walking group took on the Slieve Binnian loop. It was a blustery but sunny day in the Mournes, and the famous double-crowned mountain looked pretty darn appealing as we set off from Carrick Little.

We met at the middle car park on the Oldtown Road after 10am and were ready to rock n’ roll by 10:15. We headed to the top of the lane and passed through the gate onto the track that leads all the way to the Binnian-Lamagan col, with the Annalong Wood on the right. But as we headed for the summit of  Binnian that morning, we quickly branched off to the left and began to follow the Mourne Wall in a gradually-steepening ascent. 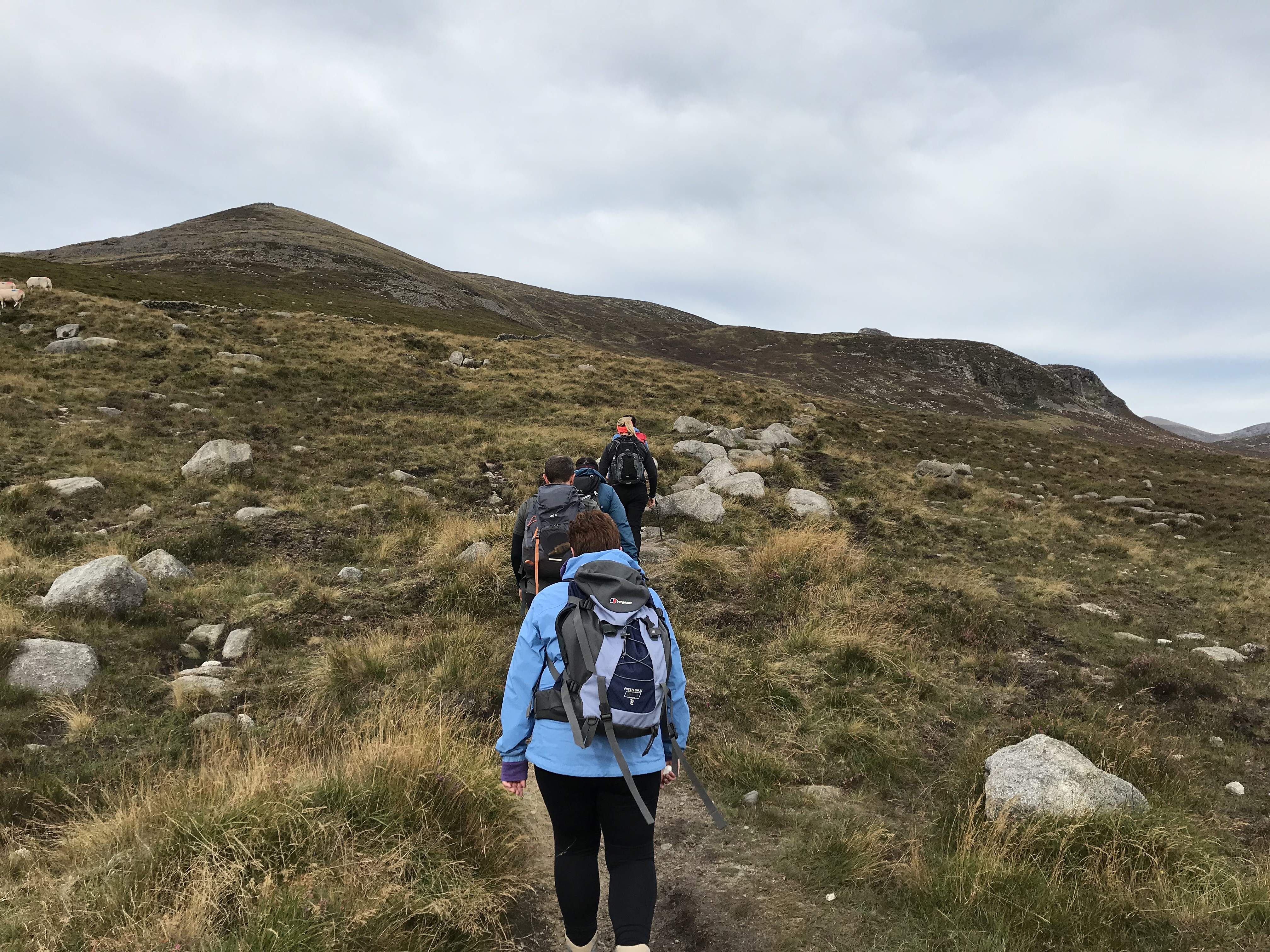 The trail towards the Binnian summit became increasingly arduous the higher we climbed, and we were feeling the burn by the time we reached the stile crossing the Wall, just a short distance below the summit. 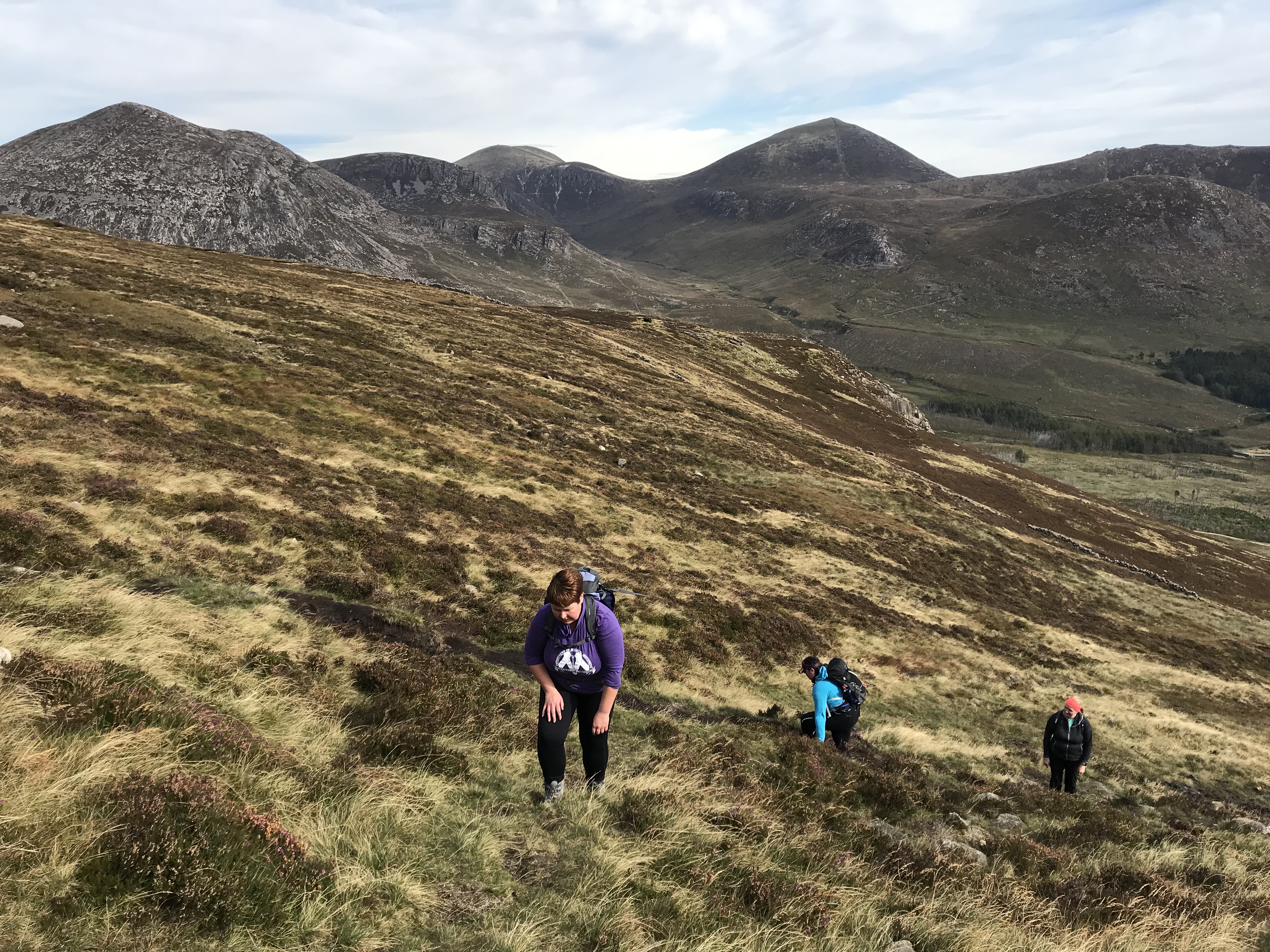 The wind wasn’t helping but we were determined to reach the top, after which the route would be almost all down hill. Jenny passed around her energising sweets (they work!) and we prepared for the final push to the rocky peak of Binnian’s southern tor. 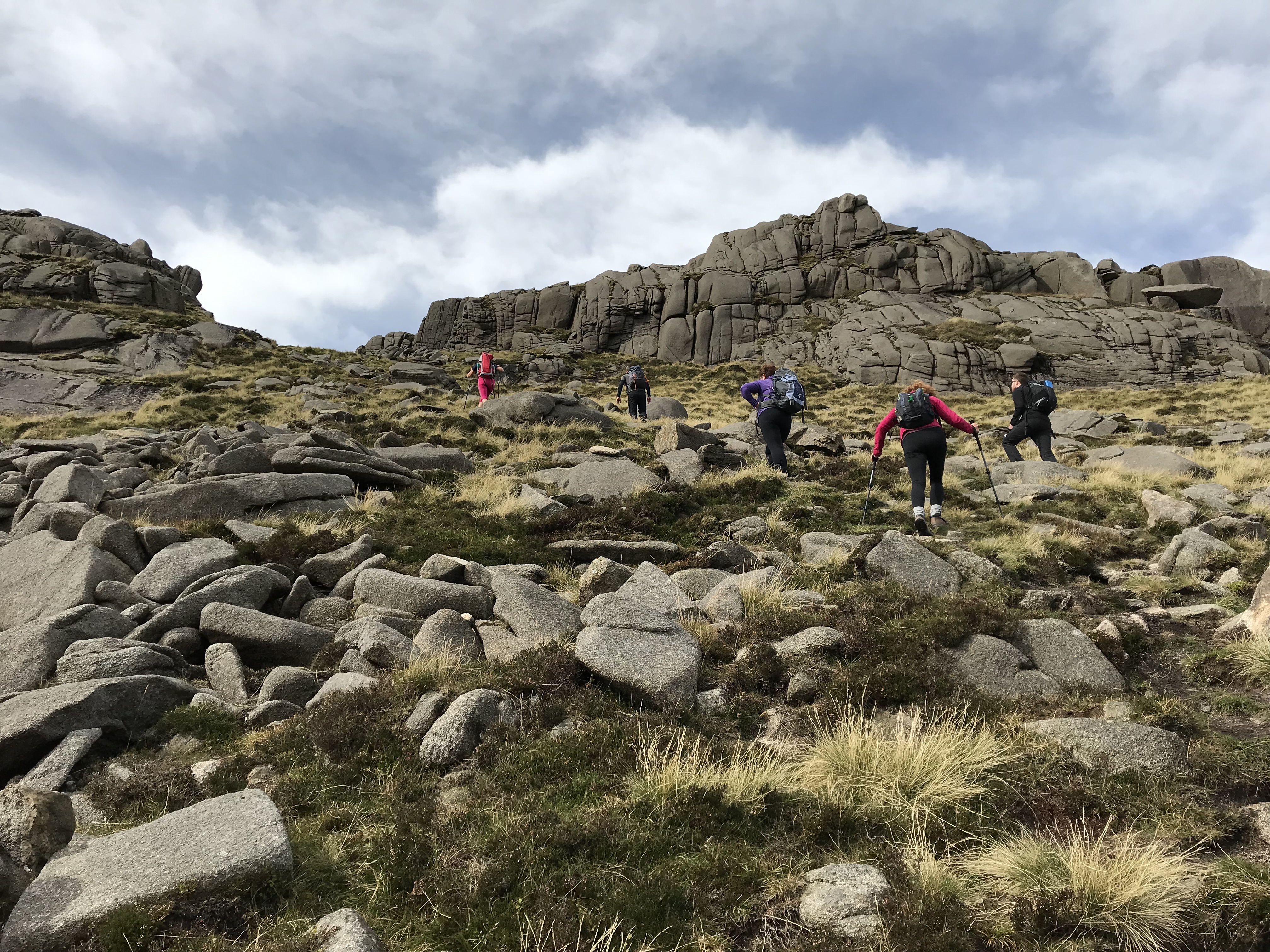 After reaching the summit, we took a quick break and enjoyed the breath-taking views over the Silent Valley, where a few of us struck a pose on Binnian’s iconic slab (has to be done, right?). 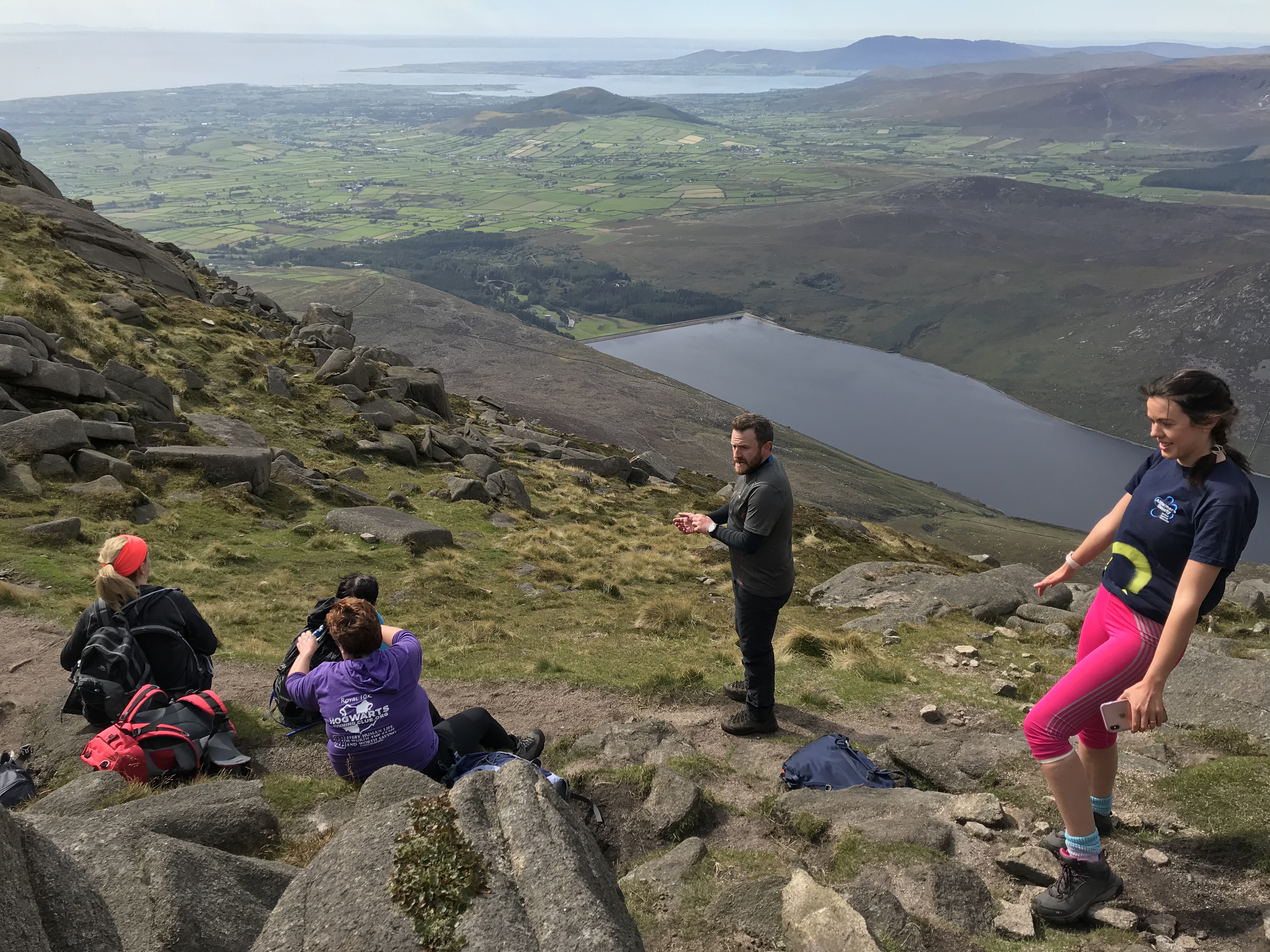 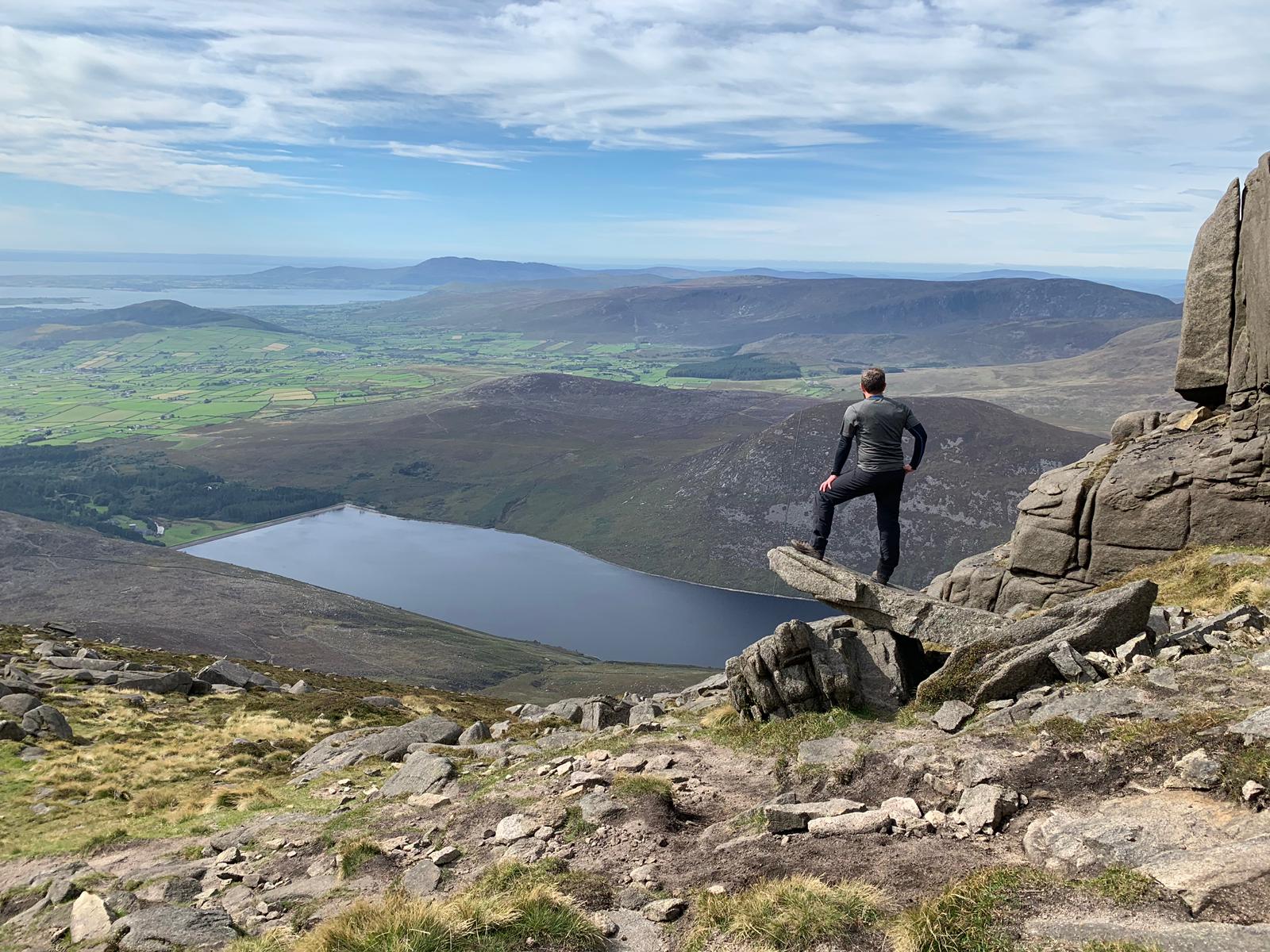 Refreshed and invigorated from our achievement, we made the short journey to a nearby rocky outcrop, where we sheltered from the wind and gobbled down our lunch. The views across the Mournes from Binnian are incredible, might I add! 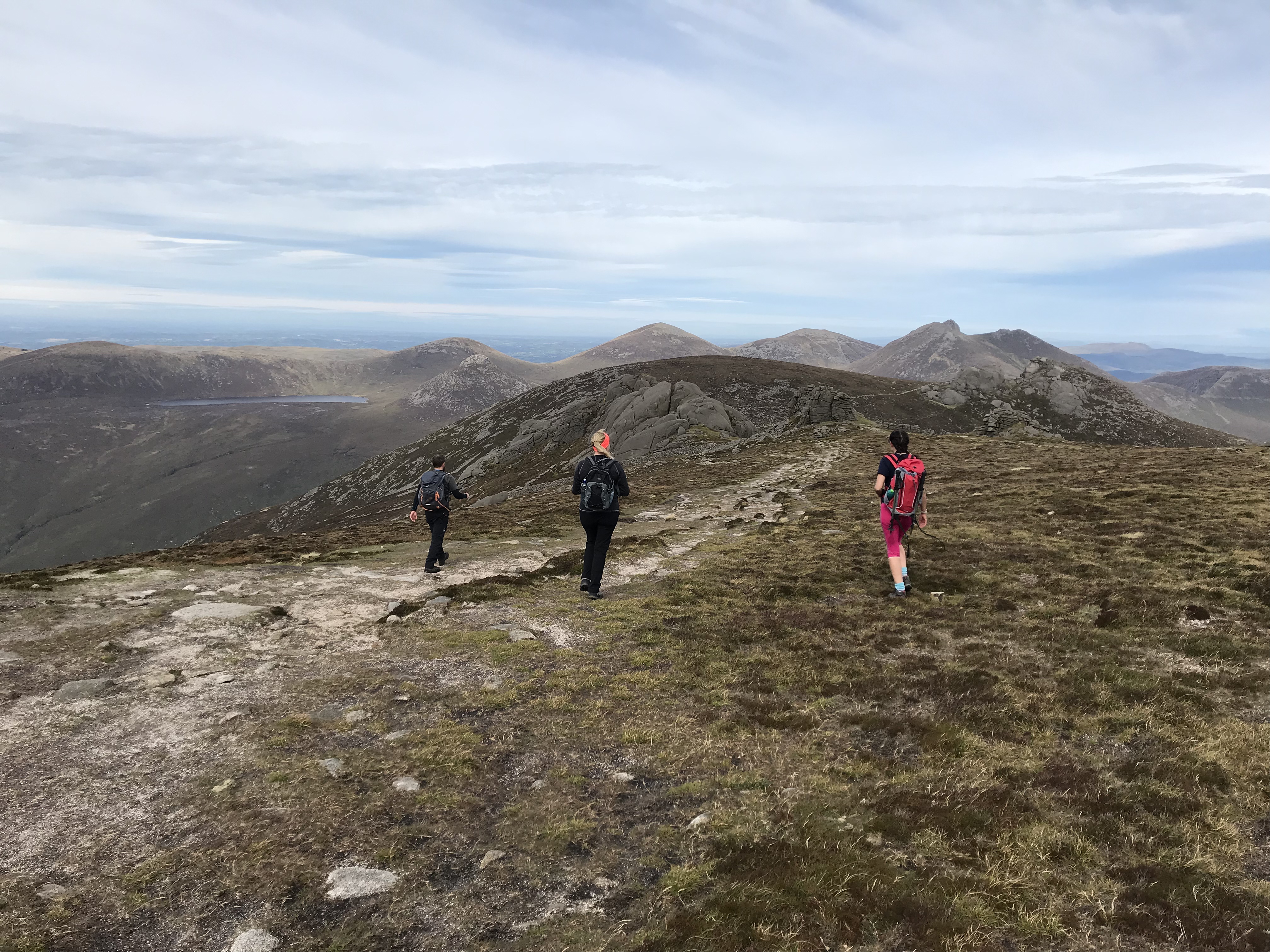 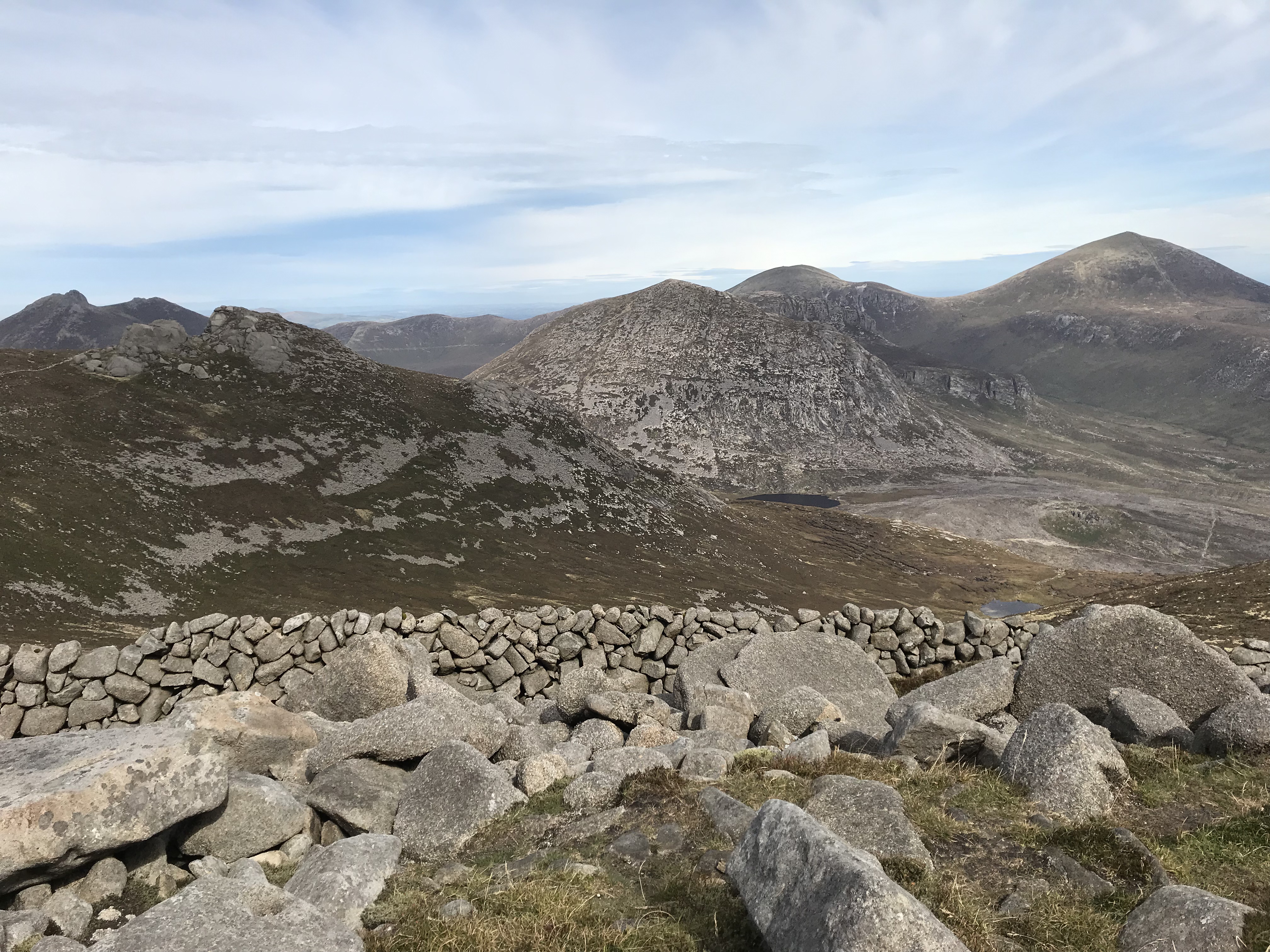 Once our snacks were consumed, we crossed between Binnian’s southern and northern tors (probably the flattest part of the whole route) and then began the descent off the mountain. 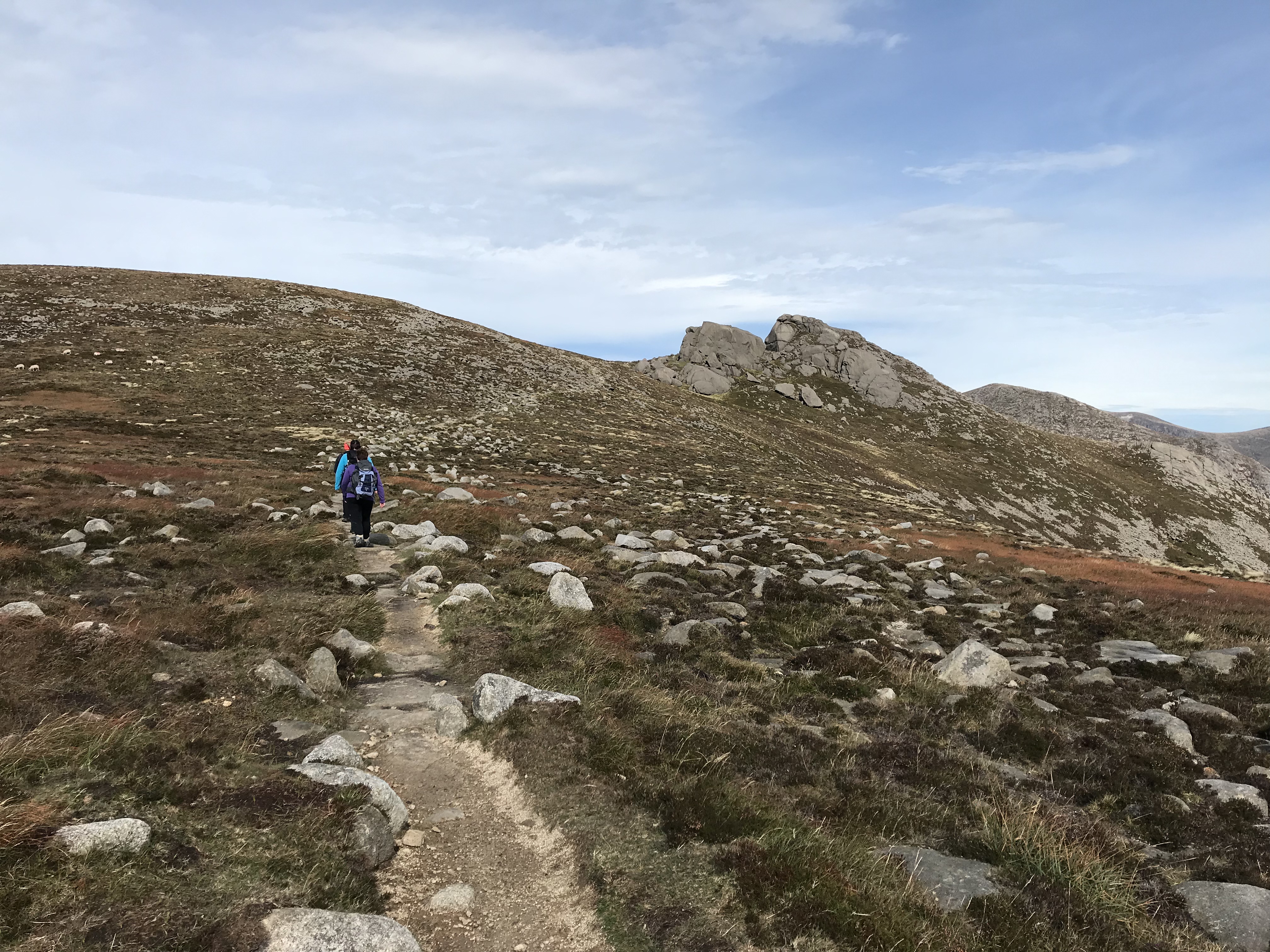 Word of warning: there are a few rocky patches on the track down, so be prepared for a bit of scrambling in places. We did pass a few dog walkers going the other way though, and the pooches seemed to be handling the ascent with ease. 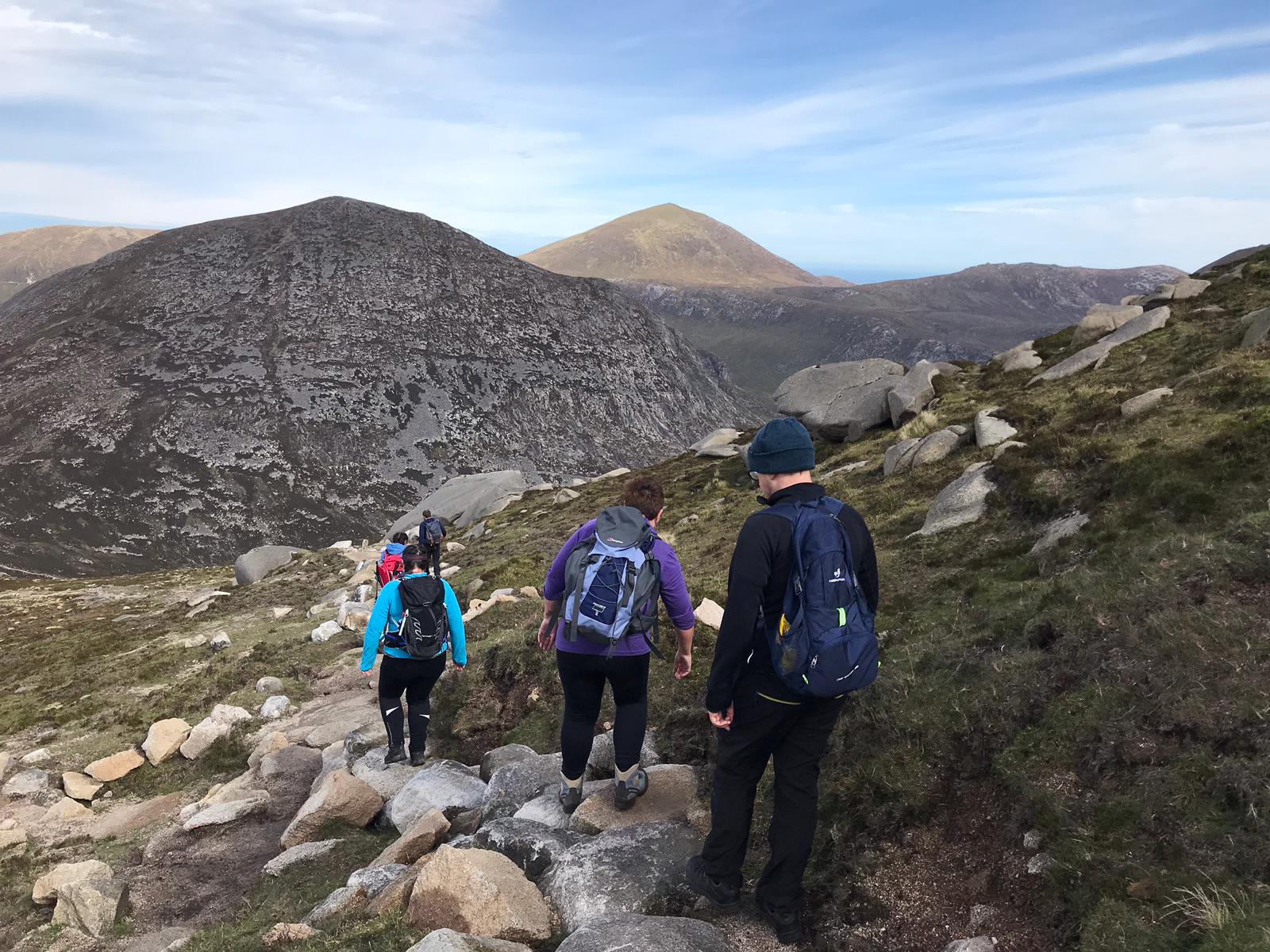 On the way down, we had a brief stop at Buzzard’s Roost and peered down at Ben Crom Reservoir (except for Beverley, who maintained a sensible distance from the edge) and then continued down to the Binnian-Lamagan col. 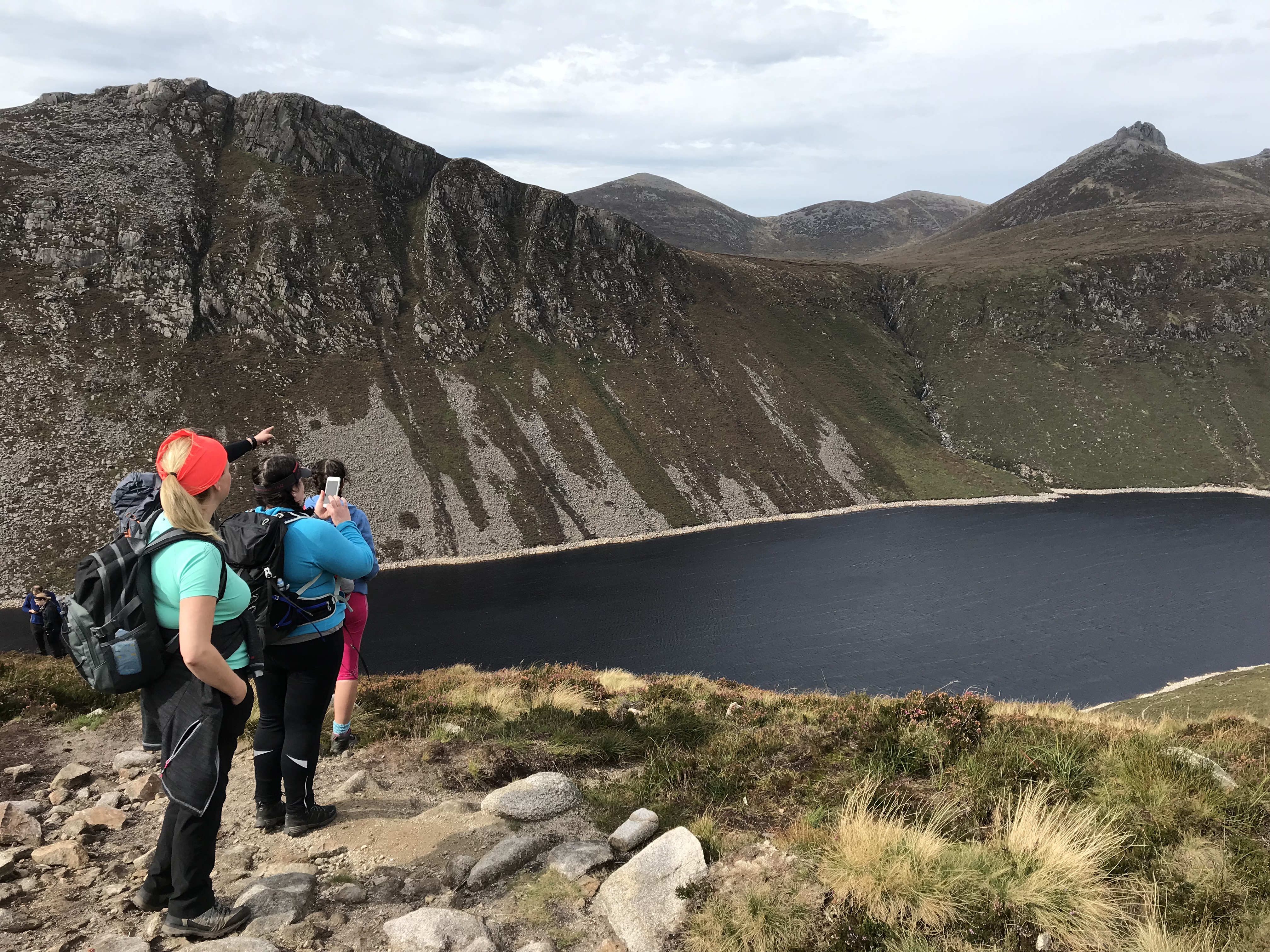 From here, it was plain-sailing all the way back to the car park, passing the Blue Lough, Percy Bysshe and Annalong Wood on the left on the way. 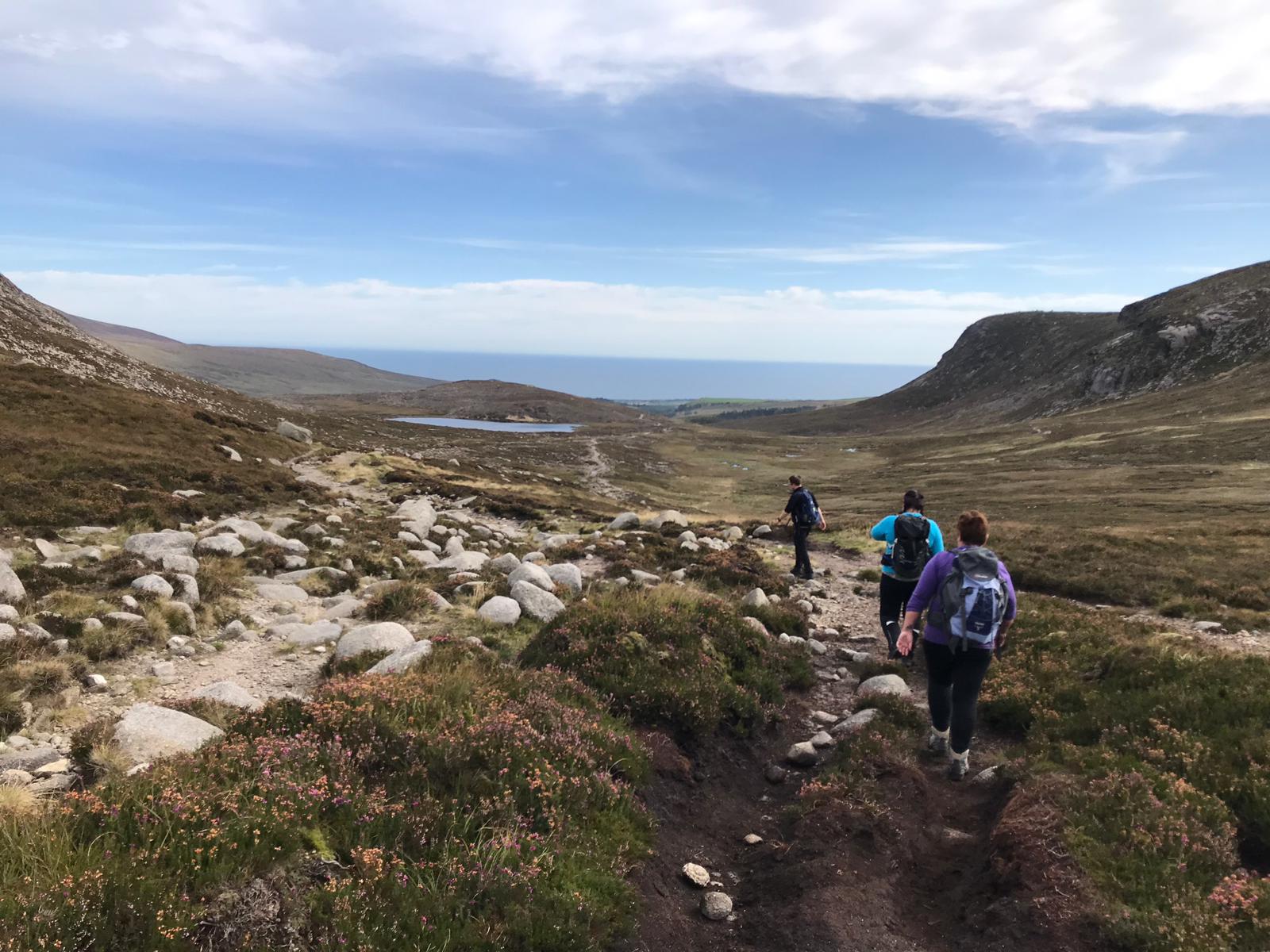 The Binnian Loop is one of the most rewarding routes in the Mournes, offering fantastic views in every direction throughout the whole journey without proving too much of a challenge (for the most part). Hikers would need a decent level of fitness for this one, but it’s certainly achievable for the majority of folks. 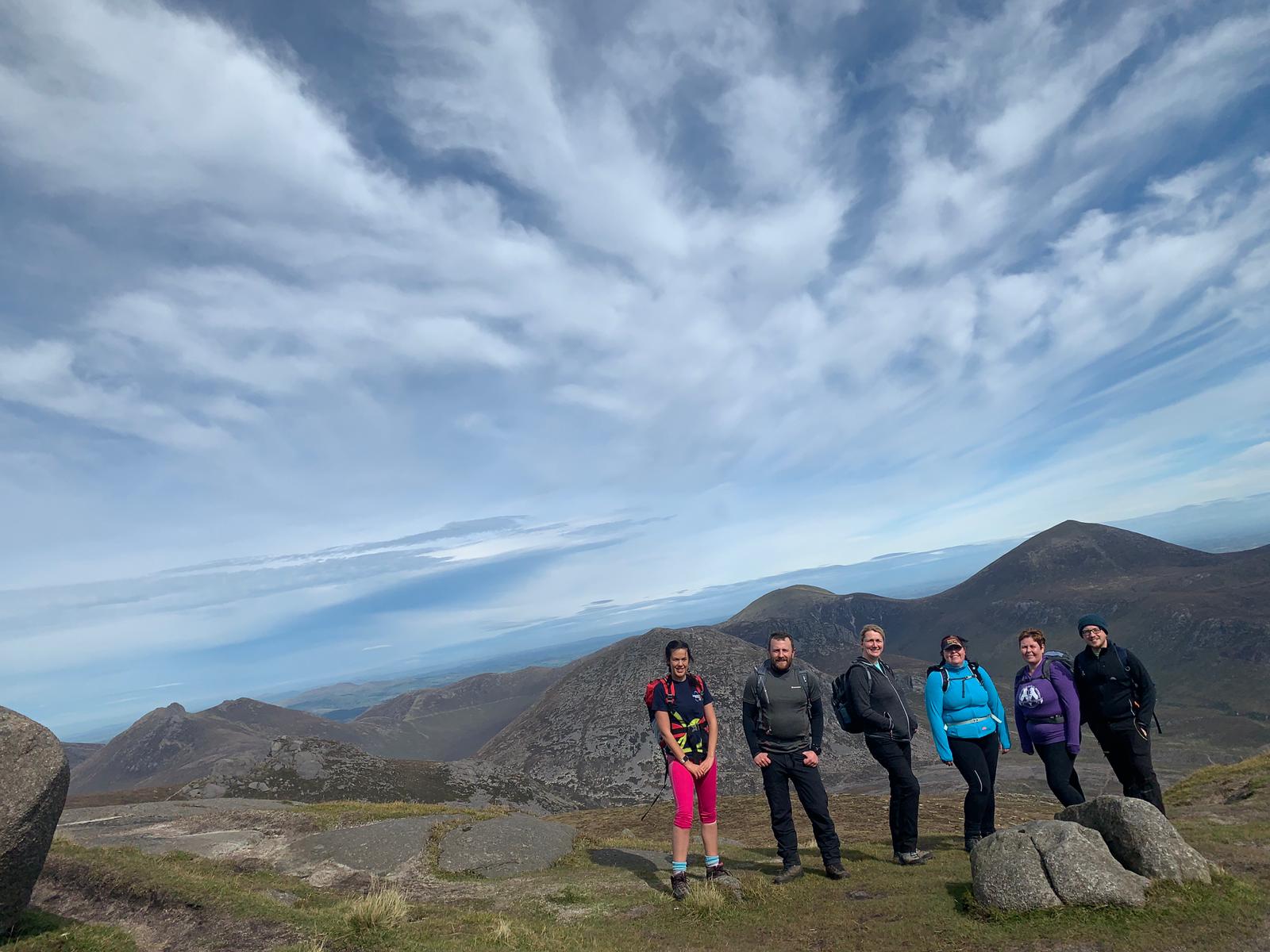